The Deanship of Quality Assurance, in cooperation with the Deanship of Scientific Research, Graduate Studies and Academic Affairs, held a workshop on Thursday, 07/09/2017, in the video hall of the conference in Gaza, in order to reach an advanced arrangement in scientific research according to international standards, Webomatrix, as part of a series of workshops that the Deanship will organize later for this purpose. The workshop was held in the presence of the staff of the Deanship of Quality Assurance and Assistant Dean of Scientific Research. Ziad Safi and Assistant Academic Deputy Dr. Fouad Ayad and a selection of academic members who have the highest ranking on Google Scholar and representatives of academic colleges.

During the opening speech, Dr.Muneer Sumour, head of the Academic Quality Unit, said that the workshop seeks to research the problems of the university because it does not have advanced arrangements in scientific research according to international standards, especially the Webometrics scale, and to provide the necessary means and solve problems to promote scientific research.

And presented d. Muneer Sumour gave a detailed explanation of the classification of Webometrics and the four evaluation criteria adopted by the classification. The items were discussed in detail by the audience.
At the end of the workshop, the participants recommended the need to stimulate scientific research and publication in refereed scientific journals and activate the Google Scholar account - Google Scholar and activate the personal pages on the university site. 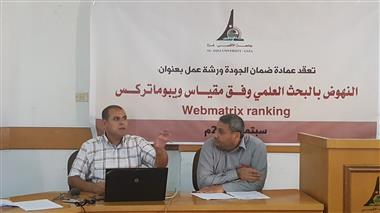